I finally finished a sock!

It’s for my mother, who has very narrow feet and slim legs so it looks a bit hilarious just laying there but it does fit her (or it did before I started the star toe). She’s asleep now so not putting it on her foot yet.

Now to get its friend cast on! I’ve only been working on these when I’m away from home. I need something that’s small enough to fit in my purse.

Pattern is Vanilla Latte Socks by Virginia Rose-Jeanes. So far, so easy.

– Last show – Avantasia at The Palladium in Worcester, MA

– Next show – Heavy Montreal! Teo day festival at the end of July in Montreal, of course!

– Best show – Falconer, ProgPower USA 2015 in Atlanta, GA. It was their final show and let’s be honest, I didn’t think I’d ever get to see them perform. It was amazing!

– Worst show – There are a few up for the running. I’m going to go either with Anathema (PPUSA 15) or Tarja (PPISA 18). As somebody else put it, Anathema was like being waterboarded with sleep…and I did fall asleep. Tarja was pure diva and boring. For all the hype, I left early, as did most of the other people in attendance. It was pretty miserable.

– Who have you seen the most? I think that’s also a tie between Sonata Arctica and Battle Beast. I think I’ve seen them both five times. I had tickets for October when they’re touring together too but something bigger came up.

– Best show venue? Center Stage in Atlanta is my favorite. I also really liked The Filmore in Philadelphia. The Egg in Albany is also pretty nice.

– Worst show venue? The Webster in Hartford, CT. It was so bad I’ve refused to go to another show there. I also really didn’t like the PNC Pavillion in Charlotte, NC.

– Who have you not seen but want to? Powerwolf, Orden Ogan, Ayreon, Dream Evil, Turisas, and Eluveitie are the ones left on my bucket list. Seeing Powerwolf and Eluveitie this October and Orden Ogan in September!

– Bands you’ve seen that you want to unsee? – Alabama. They looked like they’d escaped from a nursing home, sweatpants and all. Also not my genre.

I needed a bit of a break from reality this weekend, so I went to a concert.

What else should I be expected to do? 😀

…did I just say doom music is soothing?  Weird that I find it so.

Regardless, fun night.  I’d seen all of the bands but Moonspell before so I pretty much knew what to expect.  Moonspell was a real treat live; they created such a fun atmosphere. 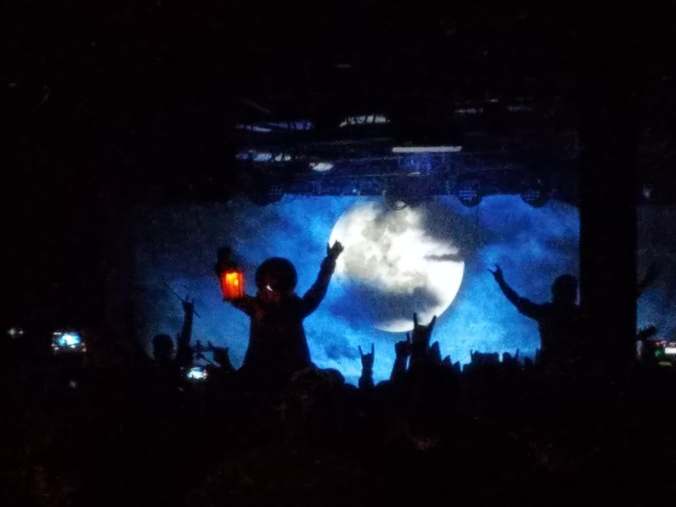 It’s impossible to see but the singer was wearing a plague doctor mask.  It was pretty awesome.  The song in that particular photo was “1755“, off of their album due out next month.  I look forward to it!