Craft room progress is coming.  I’m really thrilled with the reorganization of it so far, I suspect that I’ll be able to use it without cringing again before the end of the week.  🙂  I hope!

In the interest of sharing, here’s the library list I made of my craft room books.

I always love pawing through the books that other crafters have.  It’s interesting to see what they think is important enough to keep around and it’s a fun way to grab some ideas.

I think my cookbooks and CDs are also publicly available right now; I’m saving the rest of the books until I finish manually adding the ones without barcodes or ISBNs.  I also finished cataloging all of my patterns the other day — it was a heck of a task!  It will take forever to make a comprehensive library of them on libib, so for now they’re in a file on my google drive.

I hit my knee super hard while sitting in a closet today.  I thought I was never going to be able to escape; I turned into a howling walrus and was rolling around in pain and couldn’t stretch it out to help alleviate the pain.  It was very unpleasant.  It’s a pretty shade of purple now.

…so in the interest of sitting here a few minutes longer while my knee continues to scream at me, this popped up on facebook.  I’ll just say it was way freakin’ harder than I thought it would be.  I blame my middle name.

Every answer must start with the FIRST letter of your MIDDLE name – this is harder than you think!

Yesterday we cleared out the crazy sapling infested who-knows-what-it-was-supposed-to-be hosta ring and put our bright pink rhododendron in the center.  Okay, I mostly nursed my still very swollen ankle (kind of tired of this!) and grumbled and hobbled around where I could.

I can’t wait for it to grow nice and huge and be one of the first things I see in the mornings.

Turns out that ring of hosta was planted to hide roots for a long gone tree in the area.  The roots were poking out everywhere but dry and brittle, so it took a lot of back and upper body strength to break through all the dirt in the center.  We still haven’t laid the landscaping fabric and mulched it so we don’t have to fight more saplings; it got late and today it rained nonstop.  That can wait for another day, though. 🙂

…and of course there were more than a fair share of stray bricks to be dug up.  The only bricks in the house are in the chimney.  Not sure why they’re all over the yard.

We also went ahead and dug out all the saplings we could out of the creeping myrtle/vinca minor/periwinkle (whatever you choose to call it) that borders the woods on our property.  I’m contemplating spraying for ticks this year; they’ve been insane.  I flicked the fifth or so one crawling off of me today (and I didn’t even go crawling around in the bushes today!)…thank goodness none have burrowed yet.  Lyme disease is horrible here and our next door neighbor just died of it in March.

I also -finally- caught a good glimpse of our nester in the owl box!  We have Great Crested Flycatchers!

The picture is total crap; one flew out and landed on a tomato cage in the abandoned garden while we’re still procrastinating moving everything — I think this year, with the vacation coming up in July, that we may just not plant a food garden and work on building and moving everything instead — and I just grabbed a quick shot so I could make sure to get an ID later.  The birds don’t land often (and now we know why, seeing as they’re flycatchers), so it’s been hard for us to figure out who we have in residence.

My birthday also happened.  L gave me a wonderful set of books and a jewelry box to go along with the knitting needles and DVD he’s already given me.

The jewelry box was more for him than me, I suspect.  My current one is a wall mounted thing that looks like a photo.  It’s over our printer and I’m always dropping earrings down into our printer or heater and he’s having to fish sparklies out of things.  >_>

The books, though, are amazing.  The DVD established I’m a Miyazaki fan and the books are a hardback copy of his Nausicaa of the Valley of the Wind manga.  It’s stunning.  The film adaption is one of my favorites, so I know I’m going to love reading through this.  Amazon says they’re 1104 pages combined.  The artwork alone is gorgeous, so I’m already happy. 😀

I received a package from my Uncle and Aunt today — my Dad’s brother and his wife — for my birthday.

They sent a gift card to the local Italian eatery we made sure to drag them to when they visited.  It’s fantastic.  I can’t wait to have an excuse to gorge myself on pasta.  😀

The above photo was taken *after* I had finished eating dinner.  I have a hearty appetite and I’ve never walked away without at least two more meals worth of food from that place.

They also sent me a book they recommended Logan and I read when they were visiting over Easter called Last Days of Night by Graham Moore.  L is more than a bit obsessed with Nikola Tesla (hence our eldest cat being named Tesla), so it seems right up our alley.

The book arrived just in time, too.

I just finished up both Foundation by Mercedes Lackey and Trigger Warning by Neil Gaiman from our local library, so I’m in need of some fresh reading material.  I’ll of course have to finish the Collegium Chronicles when I head back to the library to return the books I have on loan….and probably get an armload of others while I’m at it.

I usually have several books going at once, so I think this new one will be a nice “heavy” to offset the other book I started today.  It’s one from my own, personal library.  It’s not a huge collection of books, but one I guard jealously.

I’ve filled it out quite a bit since the bookshelf was installed, but there’s the idea of it. :3  There are also quite a different selection of figures on the shelf now that L and I have finally decided what to display from his childhood toy collection (he has boxes and boxes) and random fandoms.  I’ve also donated several of the books in the photo — Mom likes to give me the books she’s finished reading as a way to get them out of her house — so there’s always a bit of a cycle.  I only keep the books that I love enough to reread.  I’ll have to get an updated photo when the house is clean.  =X

I’ve put off reading The Girl Who Raced Fairyland All the Way Home by Catherynne M. Valente since it was published last year.  It’s the final book in a series that I’ve really grown to love and I just wasn’t quite ready to end the whimsy of it all quite yet.  I’m not good at book reviews because I believe so much of reading is subjective, but what I can say for the Fairyland series is that it has somebody who has been reading adult novels since she was a child happily doing the opposite. 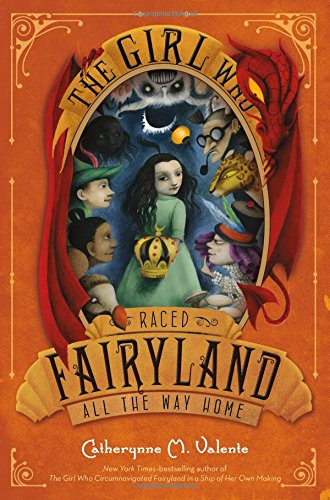