This weekend was exhausting but great.

For those of you who missed the now deleted post explaining why I’ve been so conflicted lately, a quick recap: my marriage has been in trouble for years and my husband asked for an open marriage two years ago. We’re in civil discussions about separation currently. Somewhere along the way, a mutual interest blossomed with an internet friend. It may have always been there – we were crazy about each other as teens but never met. Husband has been fully aware of the situation all along and didn’t care until the friend decided to move here and invited me to live with him (strings or no strings, whatever I want). That’s brings everything up to date and gives context.

On Saturday I drove a couple hours south to go looking at houses for my friend – the state where he lives now is on the quarantine list for NY so he couldn’t do it himself without a two week isolation and filing plans with the DOH…and it was too late for any of that because the quarantine wasn’t in effect until a few days before he traveled to stay with family in an adjoining state. I always love snooping around other people’s homes so had a good time, streamed the tours to him, and was able to investigate any questions he had with the realtor.

Mom called while I was driving and was shocked I was going anywhere alone. I rarely even get to go grocery shopping by myself. I don’t think my husband realizes what he’s doing or how controlling it seems but others comment fairly frequently about never getting to see just me.

…then I did the crazy, not like me at all thing, and hopped the state line and went to meet my friend while he was much nearer by than normal. Maybe that’s why I don’t get to go out by myself. 😅

…could be because my primary care doctor doubled my anxiety medicine two weeks ago or could be because we should’ve met half a lifetime ago, but I handled it way better than I expected.

Panic attacks? None! Not even before or while driving there!

We met at a Sheetz so bathroom, food, and gas were all available. Also so I could nope out and leave quickly. That didn’t happen.

We talked for a bit while grinning like idiots then he offered to take me around. What the heck and why not?!

I’m not completely reckless; my cousin was following me with a tracker app and was checking in so frequently that it became a joke by the end of the day.

We just did completely mundane things but I had such a good time. We had Italian ice (yum!), went to the grocery store to get treats for his dog and just compared foods we liked, I got a driving tour of the town and saw where his family lived, and then we went to a park and took a walk by the river.

We were pretty much the only people wearing masks, both being from states that require them now. Scary, y’all. No wonder this pandemic won’t go away.

One of the highlights was the grocery store. There was an autonomous robot store helper that detects spills that I couldn’t help but investigate. It then lit up and flashed and followed me around the store. Some random lady stopped me to ask what I did to get it to interact with me because her kids loved it and would be jealous…I didn’t know so just told her it must’ve detected that I was a mess. 😅

At the end of the day, he invited me to come back and meet his family – his mom had generously offered me a place to stay and a meal – but I wasn’t quite ready to meet everybody yet so we parted ways.

We did break social distancing for a masked hug though. I’m not a hugger but totally worth it, would do again and often. 😊

I had a four hour drive home but everybody that knew was calling me to ask how things went, so I didn’t have a chance to get sleepy being on the road so late. I also got hot and ready Krispy Kreme donuts on the way back. Yum!

When I got home, I had the sweetest message saying he missed my half-face already. I’m all about the little things. It’s crazy how much even holding a door open for somebody that doesn’t normally get that means. Little considerations make me so contentedly happy. My cousin swears I’m the most low maintenance person she’s ever met.  🤣

The next day, husband was a bit upset that I’d walked anywhere with anybody but won’t go hiking with him. I injured the fascia in my left leg (pain and numbness below the knee) and my doctor has me taking it easy for four months to see if it can heal without surgery, so I’ve limited my walks to no strain, a mile or less, every other day with her approval. It’s not me playing favorites.

To soothe his wounds, we took a day drive around the Adirondacks. He stopped and hiked a short trail while I stayed at the car, did the physical therapy exercises for my knee, and just enjoyed being in the mountains. Hubs has been in a bunch better mood.

All in all, a fantastic weekend that I could’ve never predicted.

I may find the motivation to do stuff around the house again now that some of the chaos has settled.

Today I’m meeting somebody I should’ve met 16 years ago.

Today I am a nervous wreck.

Here’s the quilt top I finished this week.  I think it’ll be going to my cousin’s daughter – she’s pending arrival in September or so and has two very active half-siblings.  I think bright and fun will fit right in. I don’t like pink but, to be honest, I kind of love this quilt. 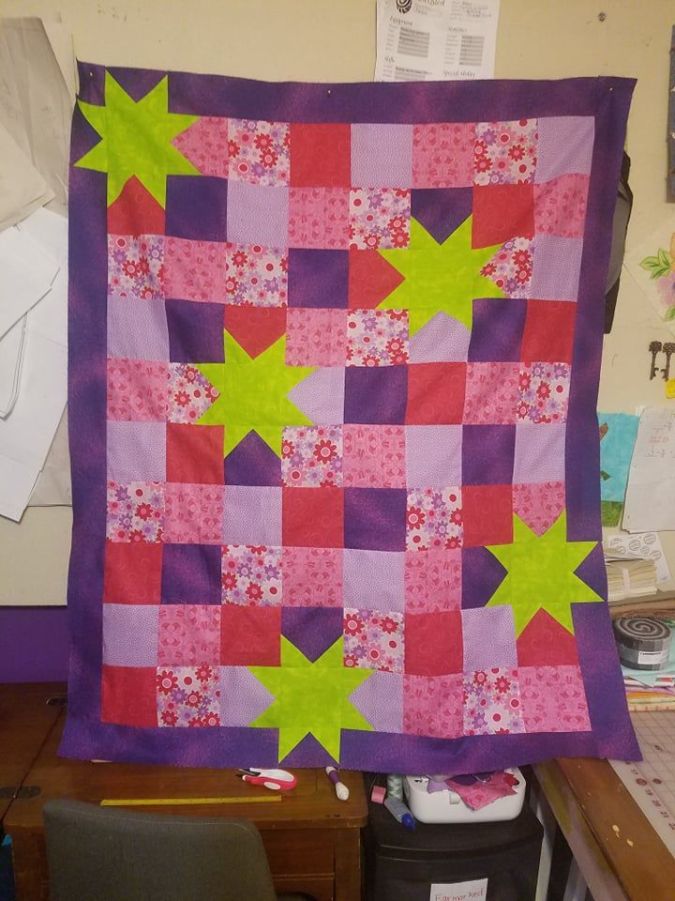