Life has a way of getting complicated, doesn’t it?

The metal festival in Montreal was fun but exhausting.  It was also insanely hot there.  I did pretty well and didn’t have any major panic attacks.  My apparently insane planning skills came in super handy: our hotel was right beside of the train and the last stop on the line, so it was impossible to miss our ride to the festival.  I also somehow, magically, managed to get my husband right at the stage – we were literally the ones holding onto the gate for his current favorite band, Beast in Black. I never looked behind me.  There were supposedly around 70,000 people there. I would’ve died if I’d turned around and realized how many were there.  Hubs got a photo of it so I could see later.  Eesh!

After that, we had a bunch more concerts and trips thrown in. We went to a cheese festival with some of his college friends.  His parents visited for a week.  I had an epic blow up at his dad.  We stayed at a cabin with his friends again. We went to another metal festival in Atlanta and saw one of my favorite bands, Orden Ogan.  All in all, nonstop busy and I’m pooped for it.  We leave in two weeks to fly to Spain for another metal festival.  I’m sensing a trend.

I got a new car at some point. Hubs scratched the shit out of it the second time he drove it.  It was NOT a good time.  It’s fixed now but it definitely caused some fights.

I picked back up crafting to calm my nerves when I’ve had time.  I made a quilt for my car and a few yarn items.  The alien is a pull string musical motion thing — a kit and lots of fun to make. Yesterday I made enough pot holders for an army because hubs keeps complaining he can’t hold a hot bowl, then I corrupted a cross-stitch kit.  Today I started a lace beaded shawl. 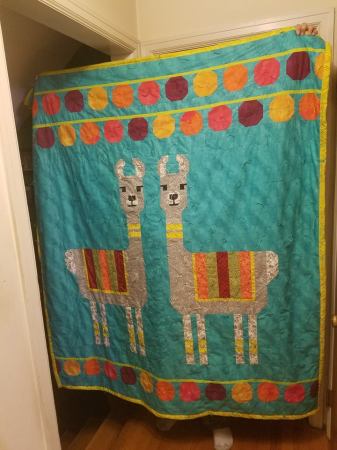 Hubs is pulling an all nighter at work and I’ve turned into a night owl again, so I’m just wasting time now while I’m too stupefied to count my knitting…once I forget a yarn over and have to tink two rows of fuzzy alpaca lace weight, I’m done.

So there’s this too, for shits and giggles:

You never know how much TV you watch until you fill this out. Put a ♥️ by the shows you have watched more than 10 episodes of:

I got 19 if I counted right.  Some were binged from boredom, others were great shows.  I don’t watch a lot of TV — at most I keep it on in the background while I’m doing other things.  I’m actually watching 13 Reasons Why right now because we have a Netflix subscription active.  Might as well try watching some of the trending shows so I know what on earth is going on.  Every time my mom calls, she wants to talk about some show she’s watching and I’ve never heard of any except Shameless.