I don’t think I’ve ever cursed and spat more than when I was trying to block my lace shawl.  I LOVED every second of knitting it and HATED every second blocking it.

I don’t have enough blocking boards for it, so I had to double it up and start over when I realized.  For really large projects I often block them on our fold out couch…but this thing was too big for that too…plus my husband decided to drag his rowing machine into that room so it’s taking up the entire floor.  Thanks, New Years resolutions!

Either way, it’s done and drying and far from perfect…but done!  I kind of let it decide what shape it was taking, which was new for me…not sure I’ll do that again.

Also: a photo of the horrible crocheted scarf from my UFO finishing list. 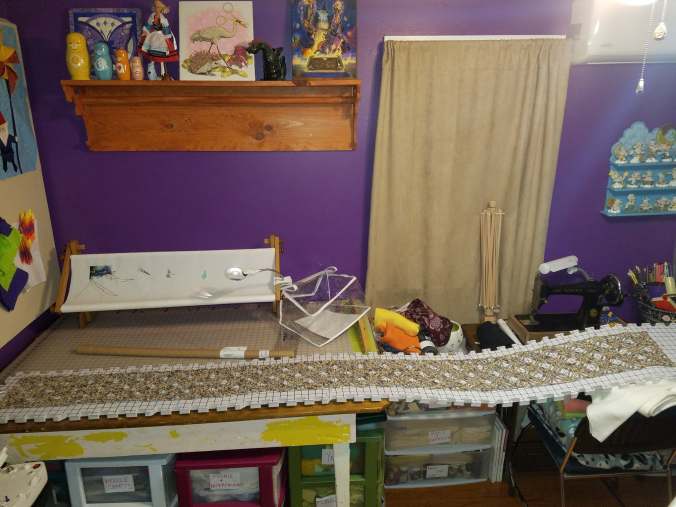 It’s also about a mile long and I hated the yarn…but the person requested it, so it’s on them to look at it forever, not me. 😀

I’m about to start casting on the mate to the monarch butterfly mittens.  They’re on my UFO list too and I’d like to get it done by February.  It’s been so long since I made the first that it may not work in my favor but I’m trying! 🙂