The Northern Flicker has been hanging around a ridiculous amount lately — the Flycatchers moved out while we were on vacation, so I suspect that has something to to do with it.  For a woodpecker, it sure spends most of the day pecking at the yard instead.  Which, to be honest, is fine by me since they eat more ants than any other bird.  Ants have been a real problem in the area this year, so keep on patrolling our yard, little buddy. 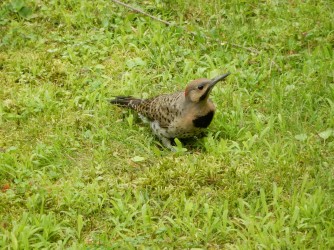 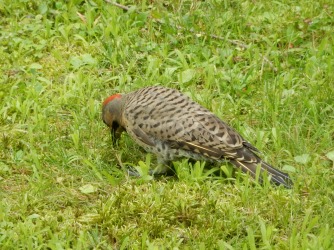 I cut my finger open sewing binding with a thin needle.  Is that even possible?

I was using the dreaded “silk” blanket binding as a quilt binding — sewed it on the front and folded it over to the back instead of sewing it on raw edge with the machine — and my normal quilting needles were going to make holes that were waaay too big, so I used a really slender needle that taught me a lesson or two about the strength of my skin.

I own thimbles.  Why didn’t I use one?

I am really, really dumb sometimes.  That’s why.

On the bright side the baby quilt is done and ready to be chucked in the wash!  Hooray!

I’ve also started a new project with some PMC3.  It’s related to the vacation and it’s for a gift, so I can’t say what it is right now, but it’s nerve wracking.  Not only is the stuff ridiculously expensive but I’m also working with limited materials.  If I mess this up, there is no going back.

Also, Joule decided she had to help and almost immediately stuck her paw in the slip I made of the clay then swipe at the irreplaceable items I was working with.

I bought the clay at the cheapest price I could find it and it was still a hair over $2 per gram.  That little bitty container was $31.35!  *dies inside*

Whoever thinks crafting and making things yourself is cheap or easy is wrong.  X_x

At this point, it’s not even relaxing!

It’s a good thing our special delivery of Scotch arrived today.  Woohoo!  We got some for a gift for somebody and L decided to go ahead and get some for himself too.  Four bottles to be exact, from different regions of Scotland, so all of them have very different flavor profiles.  I didn’t get them from the site I linked them to, but I love the descriptions of them there!  The Kilchoman is the only one that came with a pretty box and Glencairn glasses though, so it’s the only one I photographed, the others are still in their inflated bubble mailers — Talisker (tastes like a kipper, L loves it), Dalwhinnie (my current favorite, as I’m not a fan of smoke and I like the kick of spice), and Singleton of Dufftown. 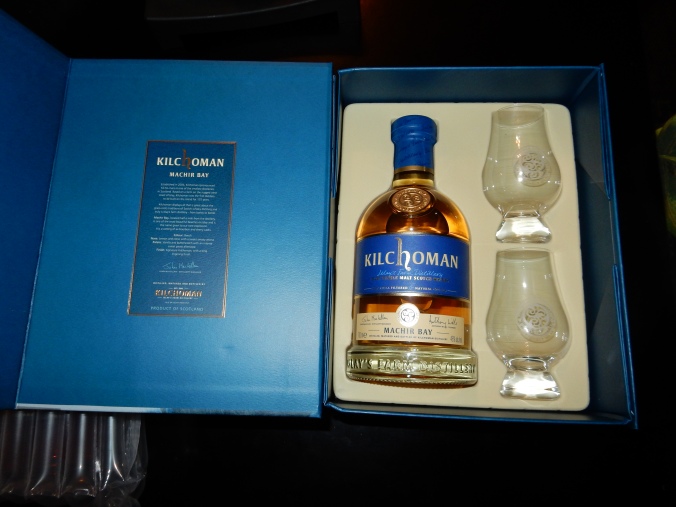 Too bad we’re saving opening it until the cabin in September with the guys.  *sigh*  I’ll re-evaluate my favorite then, as we’re planning a tasting and will try all four back to back.

It may make no sense but before the trip to Scotland, L was a “chocolate milk” type of alcohol drinker.  If it wasn’t creamy and cloyingly sweet, he wouldn’t drink it.  He somehow developed a taste for single malt (fine by me, I enjoy sipping a good Scotch as well) there, so we had some shipped to us.  He’s has also started trying other alcohols I already had at home and, so far, had discovered he likes pecan pie whiskey and will tolerate apple pie moonshine.  I have no hope of ever getting him to try fruit-flavored drinks, but at least we’ve branched away from creams!  I think next I’ll get him to try Firefly vodka.  That stuff is dangerously good if you like tea, which he does.*

*Neither L nor I drink often.  Hardly ever, really.  We usually drink just two or three times a year, so this year has been a bit different for us.  My neurologist told me to drink more, which was unusual medical advice (but prudent in my case, as it seems to be working for the reasons he advised).  L has gone along with the ride.   …we’ve still both only had maybe half a dozen drinks this year, even though this post probably makes us seem like raging alcoholics.  XD