This morning I had the distinct pleasure of having a small arc-flash scaring the bejeebus out of me.

At some point last night the ceiling fan was making a weird buzzing noise and it was enough to bother L, King of Sleep, so he got up to fix it.  It just needed a slight adjustment — we have two heavier LED bulbs in it and it just needs a bit of balance every once in a while until the other two bulbs get replaced.  While he was messing with the fan, he noticed one of the bulbs was lose and “fixed” it too (the fan lights were off and he was working with the light from the bed lamps).

Cue this morning of me turning on the ceiling fan light.

I had an awesome explosion and got to take a glass shower. 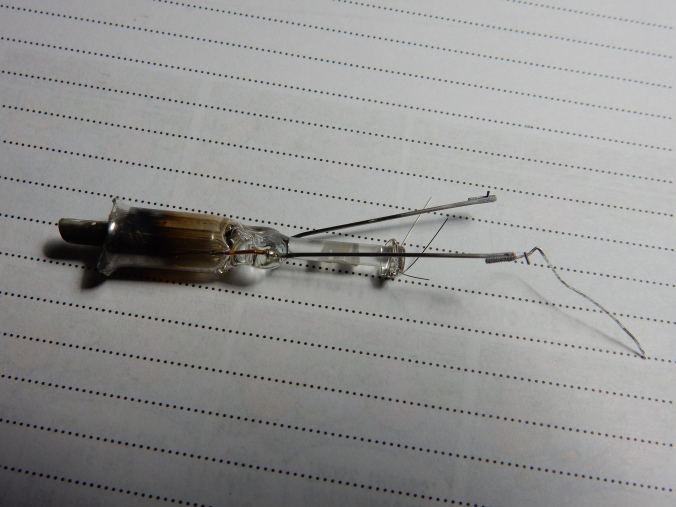 That’s all that’s left of the bulb, other than the minuscule shards of glass that rained down all over the bedroom, myself, and the sleeping dogs (equally scared and refusing to come back upstairs).  You can see the filament is fine, other than breaking in the drop, but there was definitely a short internally.

Electricity and I don’t mix.  I can do most home repairs but electrical work gives me the heebie jeebies.  We have an industrial jack-knife for our house before our fuse box and I love being able to kill the power to the entire house and know everything I’m poking at is dead as a doornail.  We’re having the panel upgraded soon though, already under contract for after the trip, so I’m really sad we’re going to have to lose the switch since it’s definitely not code and wouldn’t be able to handle the new load.  😦  Guess that leaves electrical forever in L’s domain and I’ll stick to the plumbing that makes him nervous (I figure the worst I can do is flood the house, not toast myself).

I’ve finally gotten around to reading The Last Days of Night by Graham Moore.  I haven’t finished it yet, but so far have enjoyed it quite a lot.  I won’t spoil anything, but how does it relate to this morning?  The first chapter contains a rather vivid description of an electrocution of a linesman when electric power and lightbulbs were still a novelty…and, of course, my drama brain immediately went there as I was diving out of the way of sparks and flying glass.

Rather than quote the book, here’s a link to a .pdf of the New York Times article about the incident it was referencing back in October of 1889.  News articles were just as fascinating as novels back then — I wish they were like that now. 🙂